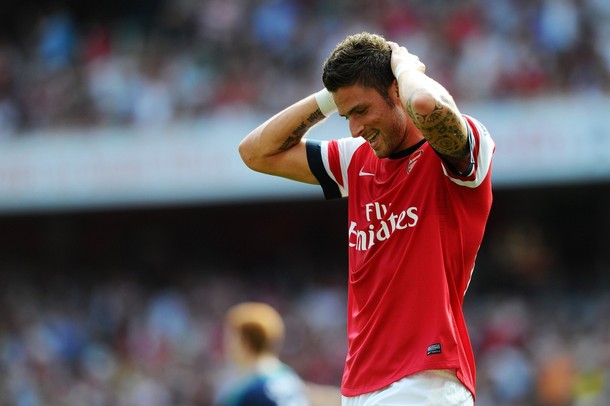 Arsenal are worried a scan on Olivier Giroud may reveal a hairline fracture that would rule the striker out of action for at least three months. Information Nigeria understands.

The former Montpellier forward sustained the injury just few seconds from full-time in the 2-2 draw at Everton last weekend.

The player came off the bench to revitalize the team that saw them leave Goodison Park with a point, after initially stumbling to goals from Seamus Coleman and Steven Naismith.

If confirmation that Giroud is injured, Arsenal would be force to comb into the transfer market for a striker.

Queens Park Rangers’ Loïc Rémy is a realistic target for £8 million, though sources tell Information Nigeria that his £90,000-a-week wage is deemed too much for the North London club.

Another player on the agenda is Samuel Eto. Although, Everton are in pole position to sign the 33-year old, the Gunners could tempt the striker with Uefa Champions League participation if they beat Besiktas on Wednesday, and also more money.

Edison Cavani and Monaco’s Radamel Falcao are also players Arsene Wenger has been monitoring, but a deal for one of the duo looks unlikely. Sources tell us a season-long loan deal for the latter would cost about £20 million, a price Wenger might not authorize.

Much awaits to be seen if the manager would spend for a Hitman or use the available options present to him which
includes: Lukas Podolski, Joel Campbell, Yaya Sanogo.

Danny Welbeck could also be a target after Manchester United told the striker they would accept offers for his departure.