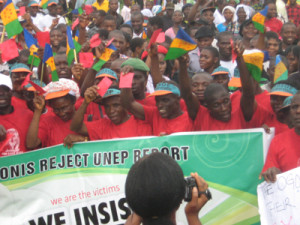 The Federal Government yesterday asked the people of Ogoni ethnic nationality in Rivers State for forgiveness following its inability to begin the full implementation of the recommendations of the United Nations Environment Programme (UNEP).

The government admitted that the Hydro-Carbon Pollution Restorations Project (HYPREP), which it established in 2012 to handle the implementation of the UNEP report in Ogoni land and other parts of the Niger Delta, failed to live up to the objectives of its establishment.

Permanent Secretary in the Federal Ministry of Petroleum Resources, Mr. Danladi Kifasi, made this known at Bori, headquarters of Khana local government area of Rivers State, during a meeting with Ogoni leaders on the process of implementation of the UNEP report.

Kifasi said, “After a through consideration of the recommendations of the UNEP report, the Presidential Implementation Committee’s report, the Petroleum Industry’s Action Plan; President Jonathan based on the provisions of the Petroleum Act CAP 350 LFN 2004, approved the establishment of the Hydro-Carbon Pollution Restoration Project (HYPREP) on the 20th July, 2012.

“Whilst HYPREP has implemented some of the transitional phase objectives as recommended in the Report. Government recognizes and is mindful that the programme has not achieved its full objectives as envisioned by this administration.

“It is in the light of this that the Honourable Minister of Petroleum Resources has now invited the relevant United Nations institutions to work with the Ministry to inject fresh agency into this process to collaboratively and collectively address this issue”.

Earlier in his welcome address, President of the Movement for the Survival of Ogoni People (MOSOP), Legborsi Sari Pyagbara, warned the Federal Government that any attempt to use the fresh moves towards the implementation of the UNEP report to play politics in Ogoniland will fail.

Pyagbara said, “We are not here for politics; we are not here to play politics. It is an Ogoni matter. I want to let our visitors know that if this is to push the political image of anybody, then, they have failed”.

The MOSOP leader called for the scrapping of HYPREP and setting up of the Ogoni Restoration Authority, in line with the recommendations of the UNEP report, adding that the people of Ogoni will continue to welcome every sincere and genuine efforts aimed at restoring the Ogoni environment.