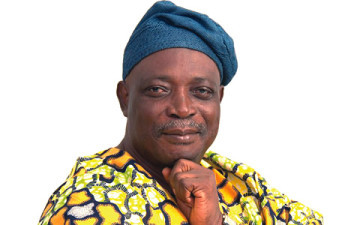 It comes just months after  Ladoja, who is also the national leader of the Accord Party, lost his son in the auto accident on the Eko Bridge in Lagos state.

The former governor’s 94-year-old mother passed away Wednesday about 7pm at the Bodija country home. The news was made available by the ex-president of the Nigerian Union of Journalist, Prince Lanre Ogundipe, who called Vanguard with the message: “Mama lived a fulfilled life”. Nigerian Tribune adds that the elderly woman died as a result of a brief illness.

It would be recalled that Ladoja’s son Adebola was caught in a ghastly accident in May, 2014, as a truck driving at a high speed lost control and rammed into the Golf driven by Adebola.

“It took several hours before the victim could be rescued from the wreckage of the vehicle. He was trapped behind the wheels with blood gushing out of his head.”

The police confirmed the young man had died on the spot and  the truck driver had been arrested.