Liking between the two male partners which started  on Facebook, ended up with the murder in a Lagos hotel room. 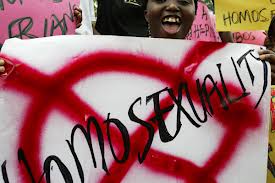 According to the report by PM News, in connection with the incident the police at State Criminal Investigation Department, Panti Yaba,  arrested one Michael Okorocha, 24, and the manager of the hotel located at Oke Afa area of the state. The suspect is accused of killing the 20-year old man identified as Okere Chinedu John.

It is reported that the two men believed to be homosexuals, got acquainted on social media. Okorocha allegedly lured the late victim to the hotel room with the intention to have sex with him. However John resisted Okorocha’s attempt, which resulted in a tragedy.

According to police, after killing the man, Okorocha left the hotel lying to the staff that he wanted to buy something outside. The naked boy of the victim was discovered by the hotel management performing routine checks in the rooms.

The case was immediately reported to the police and the suspect was nabbed with the help of John’s parents. It is reported that Okorocha confessed to the crime saying he committed it in anger because John refused to have sex with him. The man is currently at Ikoyi Prison pending the advice of the Directorate of Public Prosecution.

It will be recalled that in the beginning of the year Nigeria’s President Goodluck Jonathan signed the bill outlawing gay relationships. The law stipulates for 14 imprisonment  to “a person who enters into a same sex marriage contract or civil union”.