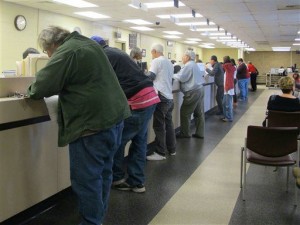 When Kevin Berry was pulled over in Portland recently, he thought he was about to get a speeding ticket. But the officer told him his license had been suspended a few weeks earlier—due to a ticket dating back 33 years. “I think it’s crazy,” Berry tells KATU, adding that he’d renewed his license without trouble for decades.

It turns out that in 1981, Berry should have indeed gotten a ticket, but due to a typo it was filed under the name “Berdy” instead, and was thus never resolved.

When the DMV discovered the error recently, it declared Berry’s license invalid, and apparently sent a letter to Berry’s address. But Berry, who recently moved, says he never received a forwarded letter.

The DMV says he doesn’t have to pay the original ticket or suspension fee due to the statute of limitations, but that he does have to pay $75 to get his license reinstated. But he’s refusing on “principle,” he says, given the issue arose over a typo that wasn’t his doing. (The Treasury Department, meanwhile, doesn’t seem to care how old a debt is.)