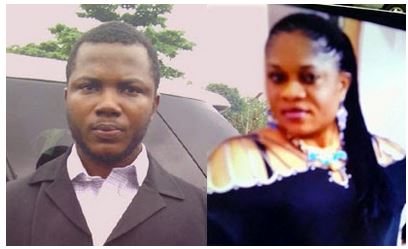 33 year old Kelechi Williams, the prime suspected in the murder of his 39 year old lover, Mrs Lizzy Njideka Nweze, was yesterday August 6th paraded by men of the Lagos state Police command where he confessed to strangling the late mother of four and Senior staff of Edmark International Limited at her Green Estate residence on July 19th. He said he killed her because he found out she was cheating on him. Below is what he told reporters

“Lizzy was my girlfriend. I knew her three years ago. But we started getting serious in February this year. I came back from Ghana to visit her on July 16, 2014 which was on aWednesday. The next day we went out and came back late. On Friday, she told me to stay back at home and rest because I was tired. She left the house, saying she was going to the new apartment she was to pack into, assuring me she would be back as usual by 6 p.m. But she did not return by 6pm. Rather, the gate man came with a power generating set, saying madam had gone to drop the workers. When it was 8 p.m. and I did not see her, I started calling her on phone but she did not pick.

I called her up to 30 times without response. She came back by midnight and when I asked why she did not pick my calls, she said the phone was in silent mode. I brought out my phone and called her line only for it to ring. At that point I noticed she was drunk. I got angry and asked if that was the way she would pay me back for leaving everything in Ghana to come and spend time with her. I threatened to quit the relationship. But at that point, her phone rang and I told her to pick it but she insisted that I should pick it and when I did, the caller, who was a male, asked ‘baby are you home?’ Immediately she discovered it was a male’s voice, she snatched the phone from me and asked why I should pick her calls. I reminded her of a similar incident when she came to visit me in Ghana and my phone rang. She pick it and on discovering it was a female, she smashed the phone on the ground, without knowing who the caller was. I reminded her also that she collected my other phones from me and brought them to Nigeria. In anger, I took the phone and smashed it on the ground. Before I knew it, she threw my things outside, saying I should leave her house. I told her to give me the N300,000 she borrowed from me to buy an air conditioner, if she wanted me to leave but she said she had no money with her and gave me her ATM card which she said had just N140,000. At a point, she slapped me and we started fighting. She held on to my manhood and started stretching it. That was when I held the wrapper that was around her neck and used it to strangle her, thereby forcing her to let go  my manhood. She fell down and became motionless. Immediately, I took her three phones, ATM card and went outside to meet the gate man to see me off to any ATM machine, where I withdrew N100,000. I dropped the gateman at home, and told him I was going to pump the tyre. At that point, I knew I was in trouble. I did not go back to her house for fear of being arrested. I drove straight to Mile 2, from where I picked a driver who drove me down to Ghana. I spent some days in Ghana before I decided to leave for Cote d’Ivoire,where unfortunately I was arrested. I never wanted to kill her. I have never fought in my life, let alone kill somebody. I did not also steal her jewellery and N8 million as claimed by the Police. The only money I withdrew was N100,000 and her phone.” he said

The Lagos state Police Commissioner, Umar Tanko, while briefing newsmen said after the suspect killed the woman, he took the SUV he stole from her to his church in Ghana where he had a thanksgiving for his new car and also made a huge donation to the church to thank God. The police boss said on the day of the murder, the suspect locked the door from outside, apparently to make it look as if they had gone out. He further disclosed that a new International Passport which bore the suspect’s name and the surname of his deceased’s lover, was found on him, suggesting that the murder was planned.On how her corpse was discovered, the security man to the late Lizzy Nwezue, John Tungwim, said he suspected a foul play when Kelechi ran out from the apartment that night.He said “he told me he was going to the club with madam but that she asked him to go and withdraw money with her ATM card first. I went with him because I know madam’s pin code. But we came back, he told me to go inside that madam said she was tired and could not go. So, he drove out alone. I never suspected anything until the next day when I did not see madam. I called one of the children’s attention to it. Out of curiosity, I climbed a ladder only to discover that madam was on the floor foaming in her mouth. I contacted her brother who called in the police.” he saidSource: Vanguard