A 32-year-old man identified as Ahmed Ibrahim, was on Wednesday brutalised by officials of the Nigerian Immigration Service at the international wing of the Murtala Muhammed Airport, Lagos, on suspicion of being a Boko Haram member. 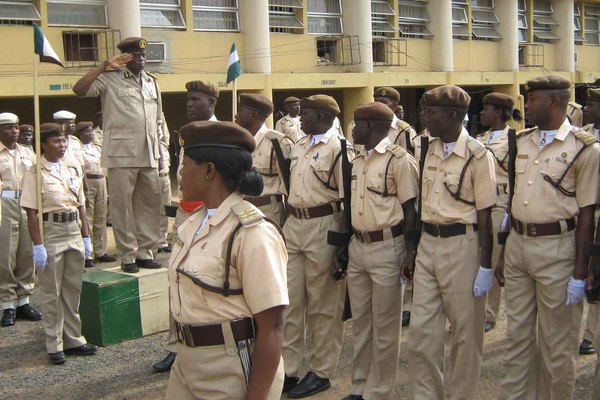 The Nigerian Tribune reports that the victim’s name was among those declared wanted by the presidency.

It was gathered that Ibrahim, who hails from Kwara State is based in Germany and was returning to Munich, when the incident occurred.

Narrating his ordeal, Ibrahim alleged that three immigration officers descended on him, with one of them hitting him on his head, which was seen currently bandaged.

Speaking further, he said he arrived at the terminal to undergo departure formalities, and was accosted by the officers who later seized his passport, a move that eventually made him miss his flight. He said the officer said he needs clearance from the Presidency before he would be allowed to leave the country.

Ibrahim said he was taken to Abuja, where he was detained that evening after his elder brother, Adam Abdullahi, had tried every means to secure his release but proved abortive as one of the officers insisted on transferring him to the headquarters at Abuja.

Responding, a source from the immigration service who spoke on condition of anonymity said the case was that of mistaken identity. He said the victim’s name was same with that of a wanted terrorist which made the officials interrogate and quiz him, adding that Ibrahim injured himself while resisting arrest.

The Jama’atu Ahlis Sunna Lidda’awati Wal-Jihad, popularly known as Boko Haram, in Hausa language meaning “Western education is sin”. Boko Haram was designated a terrorist group by the US in 2013, with his members declared wanted by the federal government of Nigeria for crime of terrorism. The terrorist group took to arm struggle in 2009, after the death of its founder, Mohammed Yusuf, while in police custody. The sect has reportedly killed scores of innocent people in its quest to Islamise the country.