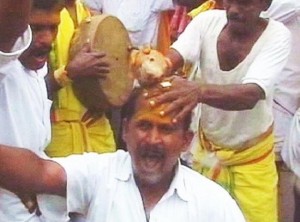 Every year, thousands of devotees travel to a remote village in the South Indian state of Tamil Nadu to put themselves through a gruesome ritual that they hope will bring them good health and success. Believe it or not, men, women and even children willingly permit priests to smash hard coconuts on their skulls!

Breaking coconuts on a sacred stone as an offering to the deity is a common practice in South Indian temples. But breaking them on one’s own head is quite rare, and viewed as an extreme display of devotion. Several devotees squat on the floor in a line, waiting patiently as the temple priests approach with a sack of coconuts. One priest holds the heads firmly, while the other one brings down the coconuts without hesitation. The whole process is completed in a matter of minutes.

Some devotees can be seen wincing in pain as the coconuts come crashing on to their heads. Some massage their heads, while others promptly collect the broken pieces as holy offerings. Surprisingly, there are a few who don’t flinch at all – these people are often in a deep meditative state of prayer. Nonetheless, medical staff are always present to tend to serious injuries.

Doctors warn devotees every year that the practice could actually be deadly. “There is a certain amount of tolerance for the skull beyond which it will cause damage,” said neurosurgery professor Anil Kumar Peethambaran. “If the coconut breaks, the energy is dissipated, but when it doesn’t this can cause damage to the skull.”

But the staunch devotees don’t seem to be worried at all; they’re confident that the deity will protect them. Despite warnings, the practice has been going on regularly since the 19th century. “My family has been coming here for years,” said one devotee. “Today, four of us have come for the ritual. The coconuts broke well – we hope it brings success.”

One woman said that she did not feel a thing, claiming that it was the goddess who saved her from pain. “I took part in the event for the first time,” she said. “The coconut broke nicely and I am happy. A lot of people in my family, all my uncles and aunts have broken coconuts. Four of us from the family came for the ritual and thankfully, all the coconuts broke well.”

P. Mani, former council president of the village, tells the story of how the ritual, which dates back to the time of Colonial India, originally started. “When the British were trying to draw a railway line against the wishes of the villagers here, they found big stones just like coconuts, beneath the ground,” he explained. “They sarcastically told the villagers that if they could break these stones with their heads, they would change the course of the railway line.”

Legend has it that the villagers did succeed in breaking the stones, and the railway line was eventually shifted. Since then, the ritual has been performed at the local temple using coconuts, attracting thousands of devotees each year.