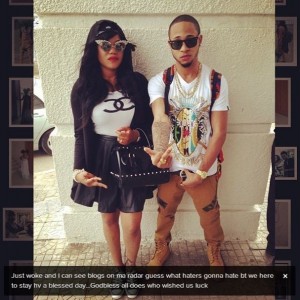 I just saw a report online that suggests that Toyin Lawani and her much younger lover have parted ways.

The source says that although it was manageable shielded from the eyes of media for the few weeks, the relationship between the Nigerian celebrity stylist and her rapper boy toy has been in the glaring eyes of all due to how they both showcased it on their various social media accounts when the going was good, especially during the pregnancy days of their baby.

Although Toyin had a grown girl from a previous relationship, this however did not debar the duo from enjoying their life.

It was learnt that Trigg allegedly tried absconding with the couple’s eight-month old baby, which Toyin caught him in the act and got him arrested.

A source close to the couple was said to have confirmed the recent development saying: ‘It’s over between them, Trigg can’t stand her anymore. It’s like he woke up from a long sleep‘.Another source also confirmed the love turned sour story saying that Trigg must have done something really bad to piss her fiancé off. ‘He went to her house and burnt her closet full of clothes. It’s that serious‘.

Although the duo have not confirmed the development, their culture of updating their pictures on Instagram has however stopped which is a pointer to this sad report.

Lawani is one of Nigeria’s popular fashion stylist and it is believed she met with Trigg years ago and tried signing him to her entertainment label.