One Israeli was killed and five others injured when an excavator rammed into a Jerusalem bus, turning it over before the driver was shot dead by police.

The incident took place on the seamline between east and west Jerusalem and came as Israel pressed a major military campaign in Gaza which has killed more than 1800 Palestinians.

Police said the excavator had overturned a bus, prompting two police officers who were in the vicinity to open fire, killing the driver and foiling what they described as a “terrorist attack”. 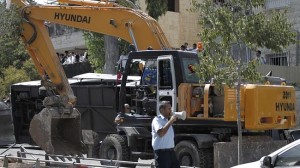 “He hit a bus and turned it onto its side and as a result three people were lightly injured who were on the bus,” Jerusalem police chief Yossi Pariente told reporters at the scene, adding that the bus was nearly empty when it was hit.

“Two police happened to be in the area … they got out of their car and fired at the (excavator) and as a result (the driver) was killed,” he said.
Emergency services spokesman Zaki Heller said one person had been killed and five hurt in the attack.

“A 25-year-old man was run over by the excavator and killed, and the bus driver was moderately to lightly injured,” he said, saying another four people were lightly hurt in the incident.

She said the driver was a Palestinian from Jabal Mukaber in annexed Arab east Jerusalem.

At the scene, the driver’s body could be seen lying on the ground covered with a white plastic bag and a prayer rug.