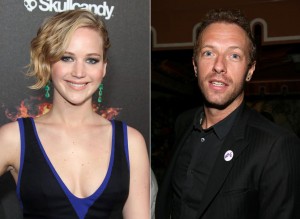 According to E!, Chris has been quietly dating Jennifer since June, just a few weeks after she ended things with on again/off again boyfriend, Nicholas Hoult.

Jen and Chris were spotted partying together as far back as July 1st after she attended his concert in London and sources said they were very affectionate with each other.

Gwyneth is said to have moved on too as she is currently dating Glee co-creator, Brad Falchuk.