Joan Rivers stops breathing during surgery, said to be in critical condition 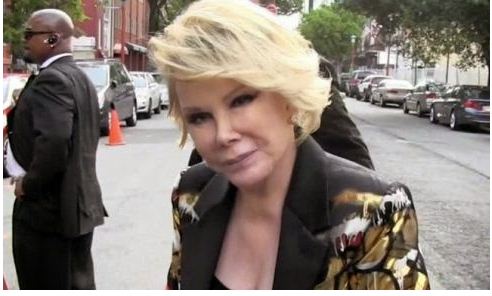 Comedian and E! Fashion Police star Joan Rivers was rushed to the hospital in New York City this afternoon after she stopped breathing during a surgery on her throatRivers, 81, was undergoing a throat procedure in a clinic when she stopped breathing. She was rushed to Mount Sinai hospital in New York where authorities said she’s in critical condition.After her heart stopped beating during surgery, an emergency call was placed to 911 and the caller said, “We have somebody in either cardiac or respiratory arrest.”TMZ said it’s not clear if doctors were able to restart her heart.

Share
Facebook
Twitter
WhatsApp
Previous articleI Have Come to Help, Says Man Utd’s New No. 7 Di Maria
Next articleNeyo blasted by fans after his ex-GF reveals he made her tie her tubes
- Advertisement -