Former President Olusegun Obasanjo held a closed-door meeting with President Goodluck Jonathan over the problems of insecurity occasioned by Boko Haram attacks among others.

The meeting was reportedly held in Abuja in the early hours of Wednesday as the two leaders reportedly examined the level of insecurity in the country. 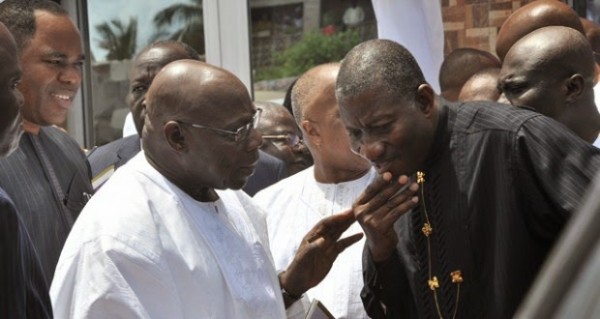 It was gathered that the visit was on the invitation of President Jonathan at the Villa.

This occurred barely two days, after the former President commended efforts of the Federal and Lagos state governments on the efforts made to check the spread of Ebola virus.

Obasanjo had however, acussed the Jonathan administration of destroying the middle class like it occurred during the regime of late dictator, General Sani Abacha,

Confirming the meeting with Jonathan to newsmen shortly after he arrived in Abeokuta from Abuja yesterday, Obasanjo said the meeting was purely on security matters.

When asked to confirm the meeting, Obasanjo said, “Yes, I can confirm that I met with Mr. President on his invitation. In fact, he had wanted to come down to Abeokuta, but as a sign of respect to the Office of the President, I had to go. We had discussion on the country’s security issues and that is all.”
Obasanjo, who appreciated the invitation of President Jonathan promised that he would continue to make himself available on national issues in the interest of peace and progress of the country.

Speaking on the Eggon/Fulani crisis rocking Nasarawa state, Obasanjo called on the government of Benue and Nasarawa states to ensure that peace is restored to the warring communities.

He said, the two; Eggon (who are farmers) and the Fulani who are herders must understand themselves over the differences .

“There is no way, such will not happen, but the two state governments should come up with lasting solutions. The farmers would want their crops to be protected, while the cattle men will also want their castles to feed. So, the government should fashion out peaceful means to end the crisis,” Obasanjo disclosed.