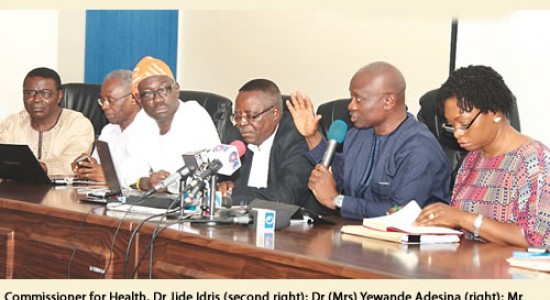 Lagos State government yesterday dispelled the rumour making the rounds that a person infected with Ebola virus disease died at a state-owned hospital in the state.

In a statement by the state commissioner for information and strategy, Mr Lateef Ibirogba, the government said the rumour is false.

He said, it is a ploy by certain individuals to label the hospitals in the state unsafe, adding that the government had before now assured residents of the state that the hospitals are safe and medically sound for them to patronise.

He added that the Ebola virus disease is being properly managed by the state government in collaboration with the federal government and other international partners.

According to him, the state has opened an isolation ward for the treatment of EVD-infected persons where they would be adequately managed by experts in line with World Health Organisation standards.

He explained that only four deaths, including the index case, have been recorded in the country since the deadly disease was imported by the Liberian, the late Patrick Sawyer, adding that all hands are on deck to get rid of the disease.