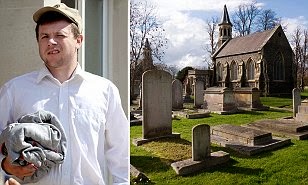 A 24 year old unemployed man has been fined after he flapped his arms about in a cemetery, scaring people and making ghost noises within earshot of mourners visiting graves .

Anthony Stallard was reported to police after he was seen throwing himself backwards and saying ‘wooooooh’ at Kingston Cemetery in his home town of Portsmouth.He was charged for using abusive words or behaviour to cause distress.

‘While the football was going on, this defendant was effectively singing loudly and being disrespectful in among the graves.He was throwing himself backwards, waving his arms about and going ‘woooooooh’.He was pretending to be a ghost.’

He admitted the charge, and accepted that his behaviour could cause distress to grieving relatives.