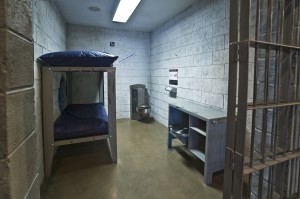 A New Jersey man is charged with engaging in a very public act of vandalism in order to get himself tossed in jail.

James Yale used a Philippine fighting stick to take the head off a rooster statue that was perched in front of the Egg Auction office complex in Flemington.

Yale reportedly took the dome off of the bird because he wanted to get out of his apartment.

According to Patrolman Brian McNally, Yale told him the “air conditioning and cable TV had been turned off in his Hunter Hills apartment and he couldn’t live like an animal any more,” the Hunterdon County Democrat reported.

The 53-year-old allegedly told the officer, “McNally, I want to go back to jail.”

The rooster’s head was found in the street and has since been glued back in place.

Yale was charged with criminal mischief, an offense which does not result in jail time.