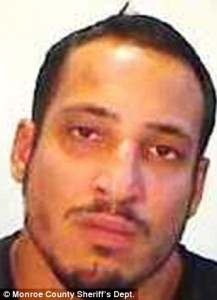 Let’s be real, just because you say you feel Déjà vu doesn’t make you a medium. Honestly some people take dreams and “feelings” way too serious.  A Florida Keys man dreamt of his girlfriend cheating on him so he savagely beat up the woman. The woman accused Gascon of choking her, pouring hot coffee on her, cutting the back of her leg with a knife, and threatening to kill her while holding a knife to her throat.

Gascon also allegedly picked her up and slammed her down on a glass table, breaking it. Carlos Gascon’s girlfriend told Monroe County Sheriff’s deputies that Gascon beat her all day Friday. After Gascon fell asleep, she was then able to call for help at around 7 pm.

Gascon faces charges of aggravated battery, aggravated assault, domestic battery by strangulation, battery and false imprisonment. He is going to need a very good lawyer because there’s practically no way of justifying his wrong doing.