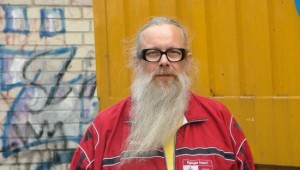 When millionaire Klaus Zapf passed away this week, the whole of Germany mourned his death. The eccentric tycoon, who always had millions at his disposal, actually lived a frugal life by choice. What endeared him most to the people of his nation was his generous nature – he gave most of his money away, while he lived on only $500 a month.

“I don’t need any money. It just makes us unequal,” Klaus once said. “There are just so many bloody idiots with money around, you don’t need another one.”

Zapf, 62, had made his fortune in the relocation business – he ran a company called Zapf Umzüge, which he often referred to as ‘West Berlin’s best removals collective’. His distinctive blue and yellow vans were quite well-known in city streets as they picked up and unloaded wares from across the country and the world.

But even though capitalism had made him rich, Zapf was a worshipper of socialism. He admired the ideology so much that he even had a statue of his hero – Vladimir Lenin – in his company’s yard in Kreuzberg. “Here, the delusions of grandeur are healed every day,” he said as he described his workplace.

Zapf, who moved to West Berlin in his youth because it was one of the few cities that allowed young men to skip military service, went to university to study law. According to German media, he was deeply immersed in the left scene as a student. Rudi Dutschke – a prominent leader of Germany’s socialist student movement in the late 1960s – is believed to have been one of his friends.

Law failed to keep him interested for long, however, and he quit school to set up his removals company in 1975. He started out by purchasing an old Transit van and offered his services at much lower prices compared to rival firms. Although he couldn’t drive the van himself, he quickly hired people and began the business of shifting furniture during moves.  The firm grew rapidly and so did Zapf’s wealth.

Despite his vast fortune, Zapf chose to live in a small apartment and received a salary that barely covered his most basic expenditures. In fact, he lived the life of a middle class man – to make ends meet, he would collect empty bottles to reclaim deposits and shop at low price supermarkets.

Zapf never even purchased a home of his own, because he thought it would only contribute to the price-spiral and then ordinary workers wouldn’t be able to afford decent housing. He always dressed modestly, and despite running a transportation empire, he never had a driver’s license.

Behind that shabby exterior, Zapf actually hid an shrewd business acumen – he accurately predicted that the nation’s capital would move from Bonn to Berlin when the Berlin Wall came down. That’s what led him to set up a depot there, establishing his large market share in the moving business. He had around 600 employees and over 60,000 customers a year at 14 different locations.

Zapf, who was married twice and on his third honeymoon, died of a heart attack on August 20 – his second in 14 years. During the last decade of his life, he made very few public appearances. “My last move will be to the cemetery in Eppingen,” he said in last interview he did in February. That is where he will be laid to rest – his funeral was attended by his 13-year-old daughter, his friends, former wives and politicians.