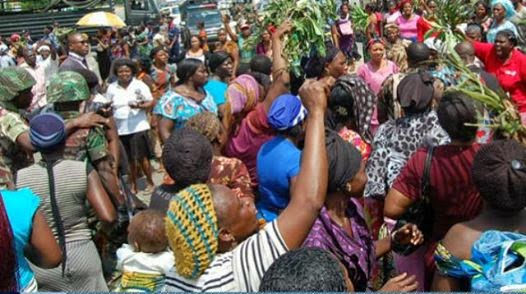 The Chief of Army Staff, Lt-General Kenneth Minimah, yesterday warned wives of soldiers to desist from interfering with deployment of their husbands or risk being kicked out of the barracks. He also warned that soldiers who mutinied, will be made to face the firing squad if convicted.

The army chief was reacting for the first time, to the incidences in Giwa barracks, which houses the 21 Armoured Brigade of the Nigerian Army, Maiduguri, where wives and children of soldiers blocked the gates, preventing the deployment of soldiers to Gwoza town, which was overrun by Boko Haram insurgents.

The women and children had forcefully stopped military trucks from transporting the soldiers, demanding quality fighting equipment for their husbands and fathers.

Reacting to the development, Minimah, who was addressing soldiers of the 82 Division of the Nigerian Army in Enugu yesterday warned that “If they repeat it, all those wives will leave the barracks”.

“This is not a civil service organisation. This is not a Boys Scout organisation. Any repeat of such act, I will tell soldiers to use koboko (whip) on the wives and bundle them out of the barracks”, he added.
Minimah also warned soldiers: “If you are tired of the army, you quietly pack your things and go away; don’t come to ridicule the army”.

He said in line with the military law, mutiny is punishable by death where the offender is found guilty.

“Mutiny is death sentence, if you are found guilty you face firing squad”, he said.

The Army Chief also advised soldiers and those who might want to mislead them into committing mutiny to always study the military law so that they would appreciate the enormity and implications of their actions.

Minimah also said the army must win the war against Boko Haram “very, very soon” with the arrival of the brand new weapons and equipment procured by the Federal Government.