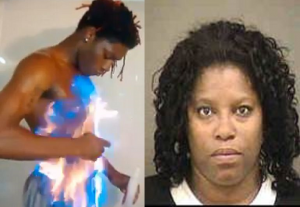 This story should be shared all over social media because children think these harmful Facebook challenges are some sort of joke.

Police in Charlotte said they arrested 41-year-old Janie Talley for helping her teenage son set himself on fire. This horrible act is called the “fire challenge” on social media.

In order to successfully complete the challenge, a person must pour flammable fluids on themselves and set them ablaze.

The point is to pour water on the flame before the fire burns deep into the skin. A spokesman for the Jaycee Burn Center in Chapel Hill says the hospital has had a 14-year-old and a 12-year-old in the past several weeks with serious injuries from the “fire challenge.”

According to police, Janie Talley’s 16-year-old son experienced minor burns after he set himself on fire. His mother and other children helped him put out the fire, which was videotaped and posted on Facebook. Janie Talley has been charged with contributing to the delinquency of a child. Sources say she doesn’t have a lawyer.