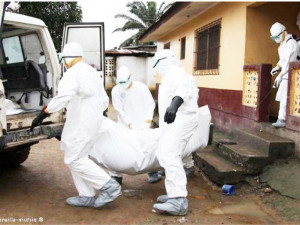 After weeks of uncertainty and heightened fear across the land over the outbreak of Ebola in Lagos State, the federal government has disclosed that two more patients earlier confirmed to have the deadly virus disease, have been discharged from hospital, thereby, leaving only one person in isolation.

Addressing journalists in Abuja yesterday, the Minister of Health, Prof. Onyebuchi Chukwu put the number of persons who have so far recovered from the virus at seven.

He also said 129 persons had been released from surveillance having passed through the 21 days incubation period for the virus without testing positive.

“All those who are under our surveillance, only one person is symptomatic; we are investigating, the result is not out. All others are not symptomatic”, he stated.

According to the minister, the number of deaths from Ebola in the country remains five, including the index case, Patrick Sawyer, who imported the virus into the nation, 38 days ago.

“Two of the treated patients, a male doctor and a female nurse were discharged yesterday, both of them primary contacts of Mr. Patrick Sawyer, having satisfied the criteria for discharged.

“As I speak to you, Nigeria has only one confirmed case of EVD, a secondary contact of Mr Patrick Sawyer. This is an indication that, thus far, Nigeria has contained the disease outbreak”, Chukwu said.

On the N1.9billion approved by President Goodluck Jonathan for the management of the Ebola virus in the country following the declaration of the Ebola outbreak a national emergency, the minister said the money was approved to improve the capacity of the health sector.

“I repeat, because now I hear that in some places, even village heads are asking for their own share. Nigeria is always thinking of sharing money. It is money for the Federal Ministry of Health to use in working. They are going to use it to procure more vehicles; which have already been ordered.