The Chief of Army Staff, Lt.-Gen. Kenneth Minimah has said the army will soon launch a massive military offensive to end insurgency in the North-East.

Minimah made this known when he addressed troops of 2 Brigade Port Harcourt at a two-day visit to army formations and units in Rivers on Sunday, 24  August, 2014. 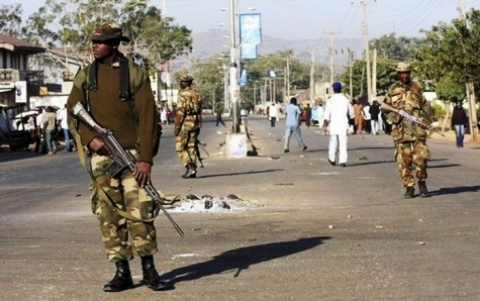 According to him, military hardware’s will soon arrive into the country in furtherance of the Federal Government resolve to end Boko Haram activities.

“The equipments ordered by the Federal Government will soon be coming into the nation’s shores in a few weeks time.

“As soon as the equipments come in, we will launch a major offensive toward ending this madness of insurgency in the North-East of the country,” he said.

Minimah said that under President Goodluck Jonathan, the army had witnessed significant improvement in personnel welfare and institutional capacity to confront the nation’s security challenges.

He said that efforts were also being made to reduce oil theft in the Niger Delta in response to new techniques devised by oil thieves to sabotage the nation’s economy.

“We cannot say we will completely stamp out oil theft in one day, but then the greater act in pursuing oil thieves is ongoing, and we will see greater result with time,” he said.

Minimah, who also inaugurated six blocks of 28 flats, and a block of five flats officers’ quarters built by the 2 Brigade, said the project would reduce accommodation deficit in the barrack.

He commended the Commanding Officer of the 29 Battalion, Lt.-Col. Olusegun Oladuntoye, for building an ultra-modern state-of-the-art Quarter Guard for the brigade.

The leader of Boko Haram, Abubakar Shekau, also on Sunday released a video where he claimed the insurgent group has taken over Gwoza town in Borno state.

The Islamist sect has staged series of attack in the southern city of Borno lately killing hundreds of people and displacing thousands of others from their villages to neighbouring towns.