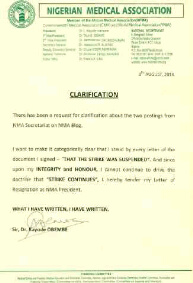 Dr. Kayode Obembe has resigned his position as National President of the Nigeria Medical Association.

His resignation came 24 hours after he announced the suspension of the strike embarked upon by the association.

Obembe in the Thursday statement calling off the strike, said the decision followed positive signals from government at the negotiation table and the need for doctors to join in the war on Ebola in the country.

His statement calling off the strike was soon contradicted by a faction of the association, which insisted the industrial action was still on course.

The stance of the pro-strike faction seemed to have forced Obembe to throw in the towel.

In a three paragraph letter on Friday, Obembe said: “There has been a request for clarification about the two postings from NMA secretariat, on the NMA blog.

“I want to make it categorically clear that I stand by every letter of the document I signed – That the strike was suspended.

“And since upon my integrity and honour, I cannot continue to drive the doctrine of ‘strike continues’, I hereby tender my letter of resignation as NMA president.

The faction declared that the strike would continue until the federal government addressed all its 24 demands.