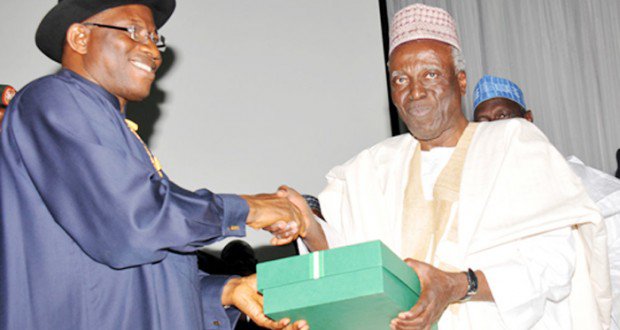 The far-reaching resolutions of the just concluded National Conference may not be subjected to a referendum after all, if the words of President Goodluck Jonathan, who declared the conference closed on Thursday, are anything to go by.

Instead, the president, who received 22 volumes of the conference report yesterday in Abuja from the chairman, Justice Idris Kutigi (retd), said the recommendations would be presented to the Council of State and the National Assembly for incorporation into the Constitution.

He also said the Executive would appropriately act on relevant aspects of the report.

In his speech while declaring the conference, which he inaugurated on March 17, closed yesterday in Abuja, Jonathan explained that he refused to interfere in the work of the conference at its dicey moments because he believed that the 492 delegates and six conference officials who, in their individual rights are qualified to lead, could find solutions to whatever challenges they encounter.

The president assured that the report would not be a waste of time and resources.

He said: “The discourse reflected our latest challenges. We shall send the relevant aspects of your recommendations to the Council of State and the National Assembly for incorporation into the Constitution.

“On our part, we shall act on those aspects required of us in the Executive.

“Let me reaffirm this: Nobody has a monopoly of knowledge. We in government need to feed from the thoughts of those who elected us into power. You have done your patriotic duty; we, the elected, must now do ours.

“As I receive the report of your painstaking deliberations, let me assure that your work is not going be a waste of time and resources. We shall do all we can to ensure the implementation of your recommendations, which have come out of consensus and not by divisions.

“In this regard, I appeal to all arms of government and the people of Nigeria to be ready to play the different roles that the volumes of reports you have produced would assign to you.

“It is my hope that with what you have done, our country is on the right road to getting the job of nation-building done.”

Jonathan noted that the report, coming 100 years after the Amalgamation, “promises to be a landmark in our history”.

He added: “I have always believed that dialogue is a better way of driving change in the community. I am happy that this dialogue has gone very well.

“With the far-reaching recommendations touching on several areas of our national life, I am convinced that this will be a major turning point for Nigeria.

“We have gone through many challenges in our first centenary. Now is the time to hit the track and take our proper lane for the race of progress. Our moment for national rebirth is here.

“We have to rekindle hope not only within our country but on the African continent where collectively our leadership is acknowledged”.

President Jonathan pointed out that one of the main reasons for convoking the Conference had been achieved: to create a platform for a genuine and sincere dialogue among Nigerians.

He noted that even when things seemed ready to boil over, it was apparent that the delegates were only disagreeing to agree.

He said: “It is now very clear that as Nigerians, we have devised a way of addressing and resolving our differences amicably: we dialogue and dialogue until we agree! This is most heart-warming indeed!

“On the occasion of the 53rd Independence Anniversary of Nigeria last year, I made a promise to set a National Conversation in motion to advance the course of nation-building. The agitation had been there for a while and we could no longer ignore it or delay the process. I was motivated by a genuine desire to make our country a better place where we can build consensus in the evolution of a new Nigeria.

“When I was inaugurating the Presidential Advisory Committee in December last year, I made it very clear to the committee that it was a sincere and fundamental undertaking, aimed at realistically examining and genuinely resolving, longstanding impediments to our cohesion and harmonious development as a truly united nation”.