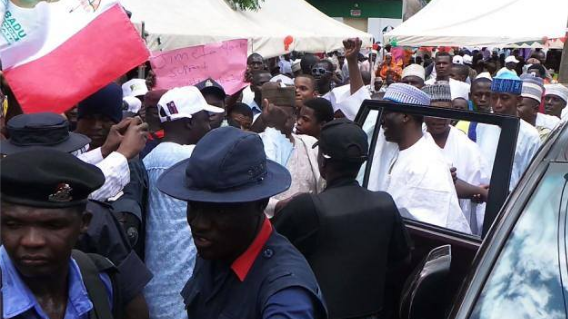 Economic activities and vehicular movements were temporarily grounded to a halt on Friday in parts of Yola, the Adamawa State capital, as a former chairman of the Economic and Financial Crimes Commission, EFCC, Malam Nuhu Ribadu, openly declared for the Peoples Democratic Party, PDP, and declared his intention to contest the Adamawa Governorship by-election.

A mammoth crowd besieged Ribadu’s convoy from the Yola International Airport following him all the way to his campaign office, causing a traffic gridlock as they headed for the PDP state secretariat.

Some of the PDP chieftains present at the occasion include former state lawmakers, led by a former speaker, Abubakar Abdullahi, former local government chairmen, ex-councillors and senior political associates of the immediate past governor, Murtala Nyako, who have since pitched tent with Ribadu.

While declaring, Malam Ribadu said he was in the race not to seek personal glory, but to bring change to Adamawa State.

“The trigger of me being here today is that passion to uplift that I have; it is that spirit with which I am known, all my life. It is that zeal that saw me going into the police, as against obviously more lucrative career paths”, he said.

Ribadu continued: “My philosophy, as we were taught, is that one should put the interest of the public over any other consideration. In life of service, one’s first consideration should be the impact one makes under the circumstance. It is therefore that same will to serve that is responsible for me respecting and answering to the people’s choice to come back home and serve the people of Adamawa State under the platform of the PDP”.

He commended those who wooed him to PDP, stressing that, “I would like to appreciate those members of the PDP who privately and publically prodded on me to join this party. My appreciation also to the leadership of our party for the warm reception accorded me deserving of any full-fledged party stalwart.

“This kind reception did not begin from today, it began from the day I signified the intention of joining this great party. Today, I come to you as a full-blown party member who defines himself in the spirit of community service and party development. Whatever brought us here, the love for and need to serve our people is supreme”, he noted.

The governorship aspirant, whose application for a waiver to enable him contest the October 11 by-election is still in the balance, urged political actors in the state to shun acts that do not augur well for the state.

“I would appeal to all political actors in the state, especially my fellow aspirants to go into the field armed with our rules of engagements. No one’s ambition is worth the peace and stability of our people.

“We should eschew antagonism or stoking primordial sentiments. Elections would come and go but the people will always be together. Damaging the harmony we enjoy as a people would have dire consequences on all of us and is the gravest disservice anyone can do for our dear state”, Mr. Ribadu noted.