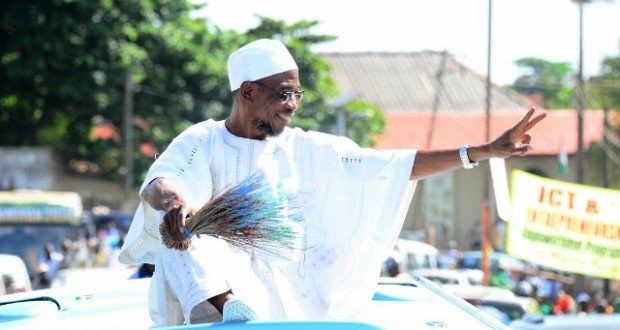 The Osun State Governor, Ogbeni Rauf Aregbesola has said Saturday’s campaign rally of the Peoples Democratic Party (PDP) in Osogbo, the state capital, has further established the fact that the party has no plan at all for the development and progress of the state except to return the state to the Stone Age.

The PDP held its governorship campaign grand finale for the August 9, 2014 election yesterday at the Osogbo City stadium, with President Goodluck Jonathan leading the pack of political heavyweights, who stormed the state for the party’s Flagbearer, Senator Iyiola Omisore.

Reacting to the statements of speakers at the rally, the Director, Bureau of Communications and Strategy in the Office of the Governor of Osun, Mr Semiu Okanlawon, said that the PDP rally was so empty that it left the few who paid attention to what the PDP leaders had to say, bewildered.

Okanlawon said “all the PDP bigwigs including President Goodluck Jonathan and Vice Preisdent Nnamadi Sambo could not tell the people in one statement what their party has in stock and what they intend to do differently”.

According to Okanlawon, what the PDP did with its “so-called” mega rally, was to at best just register its presence in the state, having discovered that their candidate has no chance in the electoral contest of August 9.

“Campaign is basically and primarily meant to intimate the electorate with a political party’s manifesto and what the party intends to do differently by seeking to take power.

“What we saw of the PDP mega rally yesterday was an open demonstration of emptiness, indeed a very empty gathering meant to insult the sensibilities of the people of Osun.

“It is by this degree saddening that President Goodluck Jonathan did not tell Osun people what federal government has in stock for the state. More saddening was even the emptiness demonstrated by the party’s standard bearer, Iyiola Omisore, who did not list one programme he plans to implement in the state.

“There is no issue-based campaign. PDP or Omisore did not highlight what was wrong in the education, health, agriculture, welfare, security, youth and infrastructure development programmes and policies of Governor Rauf Aregbesola.

“Does it not confound reasoning and send a very dangerous signal to our people that PDP is merely out to hijack power and corner the resources of the state to better the lot of members of the cabal?”

Okanlawon implored the people to make wise choice by casting their votes for the continuity of Aregbesola’s government so as to guarantee unbroken growth, progress and development that started three and half years ago.