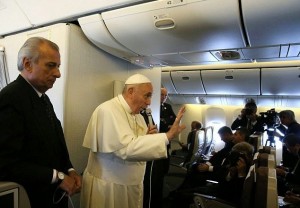 He’ll go down as one of the most famous Papal heads of the Roman Catholic church, he was the first to be name most dressed man by t=Time magazine and many more awards.

The Catholic vicar — Pope Francis has said he might have only two or three years left to live.

DailyMail reports that while on a plane trip back from South Korea, Pope Francis told journalists he believed he only had limited time left to complete his reforms of the Roman Catholic Church.

When asked about how he copes with his popularity, he said:

I try to think of my sins, my mistakes, so as not to think that I am some- body important.’

He then added with a smile:

‘Because I know this is going to last a short time, two or three years and then… to the house of the Father.’

According to a Vatican source, 77-year-old Pope Francis has previously told those close to him that he thought he only had a few years left.

He also revealed that he would consider retiring if he felt he could no longer perform his duties.

You recall that his predecessor Pope Benedict XVI resigned in February last year.

‘If you asked me if, in the future, I felt I could not go forward, would I do the same? I would do the same. Benedict has opened a door,’ Francis said on board the papal plane.