He therefore warned the national chairman of Peoples Democratic Party (PDP), Alhaji Adamu Muazu, and leadership of the party against granting waiver to him, describing the move as a calculated political plot against President Goodluck Jonathan.

Addressing journalists at his Asokoro residence in Abuja, yesterday, Chief Clark raised alarm that granting a waiver to Ribadu to contest the party’s governorship primaries in Adamawa State would amount to a serious conspiracy against the President, since the former EFCC chairman had no electoral value.

He however urged the leadership of the party to urgently grant waiver to erstwhile Military Administrator of Lagos and Borno states, Brig. Gen. Mohammed Buba Marwa and Marcus Gundiri, a former guber aspirant on the platform of Action Congress of Nigeria (ACN).

According to him, both Marwa and Gundiri are good materials with electoral values.

In a six- page letter to the PDP National Chairman, Alhaji Adamu Muazu, entitled, ‘An open letter from Chief E.K. Clark to the National Chairman of the Peoples Democratic Party, PDP, Alhaji Adamu Muazu on the fifth columnist sponsorship of Alhaji Ribadu Against Mr. President in 2015,’ Clark said: “Welcoming Alhaji Ribadu so enthusiastically, granting him an obnoxious waiver to pick up party governorship nomination papers is nothing other than grand plan against our President, party and the innocent people of Nigeria.

“How can we so brazenly break our own rules to destabilise our party, if not in a dangerous palace coup in the interests of high-level elements within and beyond the party for reasons best known to them? What is this man of many, and no distinct colour, bringing into the party? His antecedents are many; alas, not clean:

“Alhaji Nuhu Ribadu burst onto public consciousness, comfortable with a very irregular appointment into an office his rank did not qualify him for. He was comfortable, and did not consider it corruption of the established order, a promotion that catapulted him over his seniors to justify his awkward appointment.

“The former EFCC chairman has eventually been exposed as a willing vassal seemingly, accepting to pay for all that largesse to undertake the under- hand political calculations of his Boss. 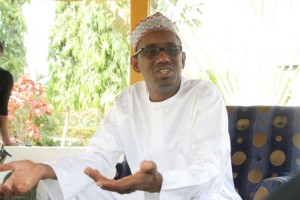 “He harassed the then Vice-President, Alhaji Atiku Abubakar, from pillar to post, with ever-increasing accusations, none of which held ground all the way to Supreme Court of Nigeria. By the way, My Chairman, it was Vice-President Atiku who introduced Alhaji Ribadu to President Obasanjo for his very high-profile appointment: see how he repaid him with a big dose of ingratitude?

“This serial ingrate did, and has continued to do the same to President Goodluck Jonathan, who also compassionately brought him back from exile, out of political oblivion and dire economic straits, and rehabilitated him with a high-profile appointment. He will yet repay in similar ingratitude!”

Clark also alleged that Ribadu was involved in the impeachment of an unnamed governor of the party in the past, adding that even when the President saved him from public disgrace by converting his dismissal to retirement as Assistant Inspector General of Police, Ribadu had refused to show gratitude to the President.

Speaking further on why the leadership of PDP must not grant Ribadu a waiver, Chief Clark noted that his attack was not on the former EFCC boss because he was not important, but because of the conspiracy he alleged was being plotted against the President by some people.

He wondered why Ribadu should be granted a waiver, having joined the party less than a month ago, against the interest of standing loyalists to the party.

“My respected chairman, is this the paperweight politician in his Adamawa State which gave the President the second highest number of votes, behind Taraba, that is being celebrated as a viable candidate to fly the party’s flag in 2015? A presidential candidate turned governorship aspirant, being celebrated? And you are from that zone, and should know much more than I.

“Why do we seem so unmindful of the collateral damage this abnormal development, its timing and all, would cause the party, in terms of loss of enthusiasm, indeed, membership in massive numbers.

“Has something gone into our eyes and brains, or are we all locked in the voodoo charms of some fifth-columnists working out some wicked, unpatriotic, subterranean agenda, in league with our opponents, to undercut the President, therefore, the party and nation?”