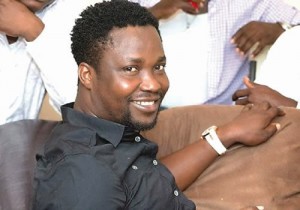 I came across this report and the source is City People’s magazine. The magazine claims that popular Yoruba actor — Soji Omo Banke is dating the elder sister of famous out of favored Nigerian defender – Taye Taiwo.

Soji Taiwo, aka Omo Banke is one of most sought-after Yoruba actors in the movie industry. Though, he came into limelight a few years back, he has been able to carve a niche for himself, which is why he’s head and shoulders above many of his contemporaries.

He is not only a wave-making actor, who producers can’t do without, and an actor who many movie buffs are crazy about, Omobanke is cleaning out. He is among the very few new generation of Yoruba actors who live large. He lives in a very comfortable home and drives a Range Rover ( He is the only Yoruba male actor who owns a Range Rover) Omo Banke as he’s commonly known as, has a lot going for him. He rolls with the big boys in town, and MCs classy events (he is a MC of repute).

However, the versatile actor, we gathered is having an affair with a Lagos big babe, Basirat. Basirat is the elder sister of Nigerian Soccer Star, Taye Taiwo. For those who have been wondering while the actor is always mentioning Taye Taiwo’s name, and wearing the former Super Eagles left full back’s jersey in his movies, he is very close to the footballer and his siblings. Entertainment weekly gathered that, they have been dating for a while, and they are deeply in love with each other.

Omobanke frequents her house at Egbeda and they are always seen together in this area. Basirat is someone who Taye Taiwo holds in high esteem amongst her siblings owing to this, he spoils her with expensive gifts. It was learnt that, the lady played a big role in his life before he became a soccer star. And right now, she plays a motherly role to the former Olympique Marseille player. She is said to be in charge of Taiwo’s many properties. Basirat is a popular babe in Egbeda axis; she cruises around in exotic automobiles.

But the question someone just asked here is what happened to his widely celebrated marriage he had in Canada with a Canadian lady in 2012.