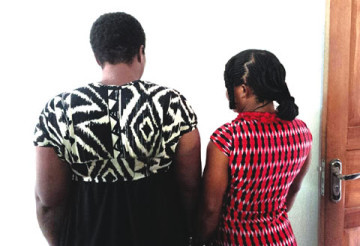 The suspects who are alleged to be part of a child-trafficking syndicate were arrested at Eta-Agbor Road where they were transacting the sale of an unidentified, two-year old boy for N600, 000, according to Commander of the QIS, Capt. Mohammed Tanko.

Tanko said: “The arrested suspects also attempted to bribe the QIS officials with N500, 000 when they were rounded up.”

The suspects, who were 30-year-old trader from the Etinan Local Government Area of Akwa Ibom State and a 33-year-old Health Record Officer at the University of Calabar Teaching Hospital from Akpabuyo LGA, admitted to the crime.

The trader said her husband worked with a church in Abuja, while the health record officer disclosed that her husband was an official of the Federal Road Safety Corps in Abuja. Both of them said they were married with children.

The suspect from Akpabuyo, who served as a middleman between the seller and the buyer, said she was an employee of the University of Calabar Teaching Hospital.

According to her, the buyer said she needed a child to adopt, but didn’t want to go through the proper process because she feared that one day the child would be collected by the government.

The suspect from Etinan, who was the buyer, said she had already paid the said sum.

The state Security Adviser, Mr. Rekpene Bassey said, “Investigation is ongoing to bring their accomplices to book. The suspects will be handed over to the police.”

Bassey who praised the sources who provided information that led to the arrest of the women also urged members of the public to do same while stating that the state would continue to uphold a zero tolerance policy to all forms of crime.