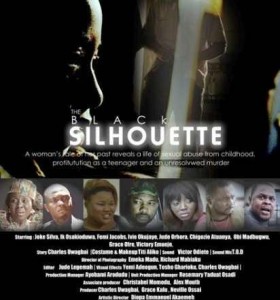 The new movie to hit town is from Creative Minds Studios – Black Silhouette.

It is a gritty drama that exposes a young girl’s traumatic past that involves sexual abuse, prostitution, and an unsolved murder.

Senator Maro Oti (Joke Silva) is about to make history as the first female Governor in Nigeria. Despite her husband’s disapproval she fixes an appointment with internationally acclaimed Biographer Eric Mobumba (IK Osakioduwa) and requests that he writes her memoir.

Eric Mobumba is elated at the opportunity but his excitement however starts to dwindle as Senator Maro’s tale of her past reveals a life of sexual abuse from childhood, prostitution as a teenager and an unresolved murder.

The movie will be screened nationwide in November.