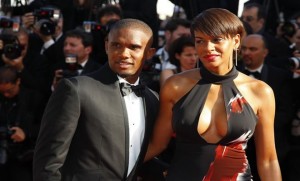 Its no news that soccer stars have very deep pockets.

Cameroonian footballer, Samuel Eto’o proven that not to be a mere speculation but a solid fact.

The professional footballer has reportedly acquire a ring  said to be worth £500,000 (approximately N81 million) to seal his engagement to his long-time partner, Georgette Tra Lou.

The couple who have been dating for  nine years have two children together.

They were married in the traditional way in 2007 but have now decided to make their union official.