As panic over the outbreak of the deadly Ebola disease continues to rise, Prophet T.B. Joshua of the Synagogue Church of All Nations (SCOAN), has asked those infected with the disease to remain in their countries. 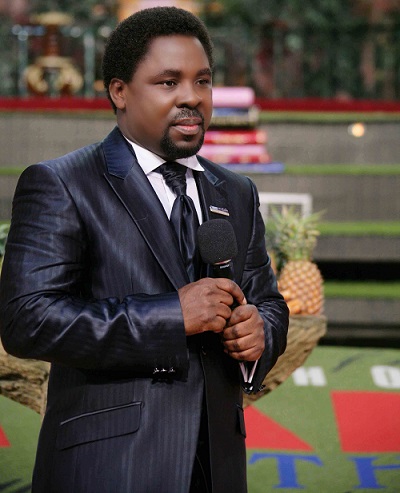 T.B Joshua’s directive came on the heels of a sensitization visit to the Church by the Lagos State Ministry of Health and the Federal Government over the deadly virus called Ebola as part of plans to combat the inflow of the deadly disease into the country.

Following the visit, the Prophet took to his official Facebook page to warn Ebola victims to obey the law of the land and remain in their country. 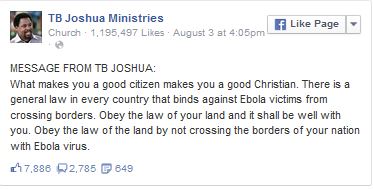 Joshua, the general overseer of SCOAN is known for his claims of using divine powers to heal all kinds of diseases and disabilities, prompting sick people from all over Africa and the world to throng the church. Also, many foreigners who are majorly from countries of the West African sub-Region, which had already been infected by the Ebola disease, worship at the Synagogue church.

After there was a reported case of Ebola in Nigeria, following the death of a Liberian man, Patrick Sawyer in a Lagos hospital, a pastor, Ituah Ighodalo, the Founder of Trinity House had shared a message on Facebook about a Pastor who cured Ebola in the name of Jesus. This sparked outrage as many misquoted him as saying he had a cure for the deadly disease. He has since come out to clarify his post which according to him was merely a message of hope and faith to remind people that with God all things are possible.

Meanwhile, it was revealed yesterday by the Health Minister, Onyebuchi Chukwu, that a doctor in Lagos who treated the late Liberian man had contracted the deadly Ebola disease.