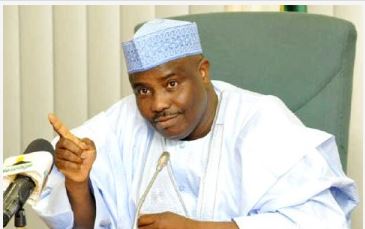 There are strong indications that the Speaker of the House of Representatives, Mr. Aminu Tambuwal, will soon defect to the All Progressives Congress.

Our correspondent learnt in Abuja on Monday that the Speaker was set to dump the Peoples Democratic Party for the APC after a nationwide consultation.

Tambuwal’s spokesperson, Imam Imam, said the nationwide consultation would determine whether the Speaker would contest the Presidency or the Sokoto State governorship election in 2015.

Imam, who spoke with our correspondent on the telephone, said that the Speaker was still consulting on the 2015 presidency and the defection to the APC.

The Speaker had on Tuesday, last week, held a closed-door meeting with former President Olusegun Obasanjo in Abeokuta, Ogun State.

After the meeting, Imam said Obasanjo and Tambuwal discussed the state of the nation.

He had said, “You know Baba (Obasanjo) is father to all in the country. The visit was a consultation. It was about how to move the country forward and make the country better.”

On Monday, www.thecable.ng reported that Tambuwal gave the biggest hint about his planned defection on Sunday in his hometown, Tambuwal, Sokoto State.

After collecting his Permanent Voter Card, Tambuwal was asked if he would defect to the APC, he responded in Hausa, “Kowa ni tsuntsu kukan gidan su yake yi,” meaning “birds of a feather flock together.”

Imam, in the interview with our correspondent on Monday, explained Tambuwal’s statements in Sokoto State on Sunday.

He said, “The Speaker granted an interview in Tambuwal yesterday (Sunday) after collecting his permanent voter card. When journalists asked him questions about defection and whether he would contest the Presidency, he only said that he had to consult his people and the consultation is still going on.

“The outcome of the consultation with the people will be made known at the appropriate time. Every politics is local. It is the needs and aspirations of your locality that will determine the direction of your own politics.”

The APC leaders that have been mentioned as having interest in the party’s presidential ticket include a former Head of State, Maj.-Gen. Muhammadu Buhari (retd.); the Kano State Governor, Alhaji Rabiu Musa Kwankwaso and a former Kwara State Governor, Senator Bukola Saraki