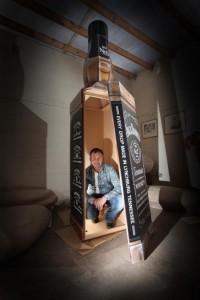 It’s not unusual for people to choose their coffins before they die, but 48-year-old Anto Wickham’s choice is a rather strange one. He’s gone and spent $50,000 on a 10-foot casket shaped like a bottle of Jack Daniels whiskey.

Well, the shape of the coffin might be bizarre, but Wickham, a former soldier, has a pretty valid reason for choosing it. After witnessing the death of eight Army pals during the Iraq war, he began to plan his own funeral – he decided he wants it to be a celebration, rather than a mourning.

“While working in Iraq I had a very close call,” said Wickham, who spent 22 years with the Royal Irish Regiment. “Over a 28-day period in February 2007, I was attacked 74 times and there were some days we would get three or four hits in one day. I was attacked by heavy machine gun fire, IEDs and roadside bombs.”

“I lost eight colleagues. At the time I thought I would have to plan my funeral because something could go wrong.” Wickham realized that he didn’t want a normal funeral, it had to be a celebration of life because he had been to ‘too many funerals of colleagues where they were very sad occasions’. So the father-of-six decided to go for something completely different.

Wickham’s favorite drink happens to be Jack Daniels, so he was toying around with the idea of using it as a theme for his own funeral. And when he was at home on leave, he saw a TV program about Crazy Coffins, a company that specializes in unique, outrageous caskets. “I asked would it be possible to make it and the answer was yes.”

According to John Gill, the owner of Crazy Coffins, “this design was very complicated because there are so many curves in a Jack Daniels bottle and it is almost cut like a diamond. We have never had to do so much sign-writing before either. We built it bit by bit because the man was fighting fit and healthy so we knew there was no rush.”

The coffin was finally ready after several months of work, and Wickham flew in from Afghanistan – where he now works as a private security guard – just to take his first glimpse of it. “It is absolutely fantastic,” he exclaimed. “When I opened it I could not believe the detail and the artwork. They have done a fantastic job. It is just amazing.”

Wickham admitted that it was a bit strange to get into the coffin at first. But he’s now gotten used to it and even posed for a few photographs as well. Anto says he also has other ideas to make his burial more exciting exciting: “My headstone is going to have a solar-panelled iPad. I plan to leave a video message with pictures of the coffin from start to finish.”

He also plans to approach Guinness to see if they would agree to take him to his service in one of their delivery vans – for the complete effect. And for the music, he opted for Sid Vicious’ ‘My Way’, “because I am doing everything my way and always have done.”

Not everyone is happy with his idea, though: “My friends see the funny side of it, but my mum and my grandparents are not too impressed,” Wickham admitted.