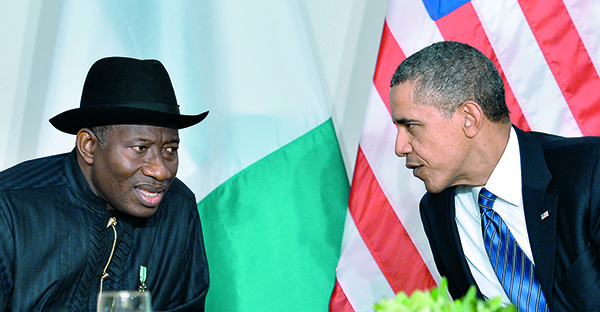 President Goodluck Jonathan will on Sunday leave for Washington DC to participate in a three-day United States-African Leaders Summit.

This is contained in a statement issued on Saturday in Abuja, by Dr Reuben Abati, the Special Adviser to the President on Media and Publicity.

The statement said that the summit was at the instance of U.S. President Barack Obama, and it would focus on trade, investment, peace, security and good governance in Africa.

“The summit is the first of its kind between an American president and African heads of state and government.

“It is expected to greatly strengthen ties between the United States, Nigeria and other African countries.

“Jonathan will join Obama and about 50 other participating African leaders for discussions that are expected to lead to greater progress in key areas.

“They include expansion in trade and investment ties, promotion of inclusive sustainable development and expansion of cooperation on peace and security”.

According to the statement, the event will feature three special sessions on “Investing in Africa’s Future,’’ “Peace and Regional Stability”, and “Governing the Next Generation”.

“Others are creating partnerships that will accelerate job creation, and encouraging even more American investments in Nigeria and other African countries”.

It added that Jonathan would also hold meetings with key United States political, security and business leaders on the sidelines of the summit.

Among issues to be discussed at the meetings are expansion of bilateral cooperation between Nigeria and the United States, and the war against terrorism.

The statement further said that the president would be accompanied to the summit by the Minister of Foreign Affairs, Mr Aminu Wali, and his Finance counterpart, Mrs Ngozi Okonjo-Iweala.

Others are the Minister of Trade and Investment, Mr Olusegun Aganga; Minister of Power, Prof. Chinedu Nebo, and the National Security Adviser, retired Col. Sambo Dasuki.

The president will return on Wednesday. (NAN)

Oshiomhole: The Legacy Jonathan Left, No Successor Can Afford To Do Less