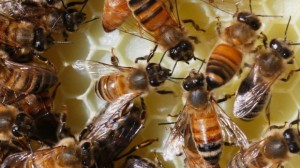 A New York City woman had some unexpected roommates living in her apartment: 50,000 bees.

WABC-TV reports  beekeepers removed the swarm from Frieda Turkmenilli’s ceiling this week after her neighbors in Queens alerted the building manager.

Turkmenilli says she saw only a few bees buzzing around over the last few weeks and never realized how many had taken up residence right above her head.

The beekeepers say the bees and the 17 honeycombs they built are headed to an upstate farm.

Turkmenilli says she already misses them and wishes they had left behind some honey.