Wanted Man Crashes Car Into Police Hunting for Him 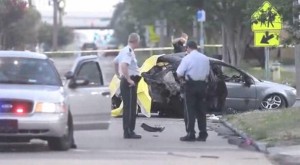 A man wanted by police in Washington accidentally turned himself in after crashing into an on-duty officer early Tuesday afternoon.

Witnesses of the crash say 24-year-old Roman I. Ryakhovskaya hit the unidentified detective from the rear while the patrol car was stopped in traffic just prior to 12:30 p.m. Tuesday.

“[The officer] was definitely not at fault,” Spokane Police spokesperson Monique Cotton told the Spokesman-Review. “Even though he was injured, he got out and assisted at the scene.”

Upon arrest, Spokane police discovered Ryakhovskaya had active arrest warrants for driving under the influence and domestic violence assault.

The arresting detective was treated at a nearby hospital for minor injuries.

Ryakhovskaya was cited for driving with a suspended license and may also receive a citation for following too close.