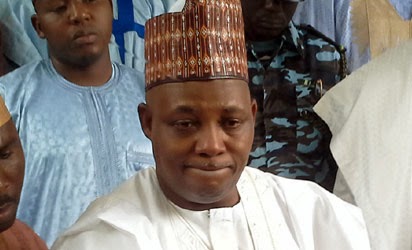 Governor Kashim Shettima of Borno State on Wednesday visited the over 1,600 people who were displaced from Damboa by Boko Haram insurgency, and are now taking refuge at a camp in Gombe State.

It was learnt that the governor also donated N2.5millon to the displaced persons while pledging to rebuild the town, which has been destroyed by the insurgents in the next two weeks.

Shettima said efforts are on to ensure that people displaced from Damboa, Gwoza and other villages in the state return to continue with their normal activities.

He commended the people and government of Gombe State, NEMA and security agencies for their assistance.

“I want to extend our propound gratitude to the government and people of Gombe State, NEMA, Red Cross and security agencies for giving shelter to thousands of displaced persons from Damboa in Borno State. The state received them and made them comfortable. May Allah give us the wherewithal to pay you back. In two weeks, we will rebuild Damboa and our people will return to their houses”, he said.

Also speaking, Senator Ali Ndume said their visit was to assess the condition of displaced persons and to thank the people of Gombe for their assistance.