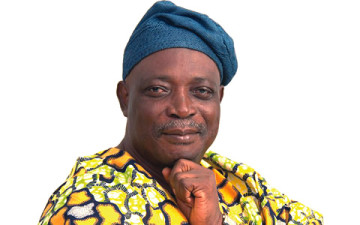 A former Governor of Oyo State and leader of the Accord Party, Senator Rashidi Ladoja, has expressed optimism that the party will win the governorship election in the state in 2015.

Speaking at a rally held by the AP in Oyo town on Friday while receiving hundreds of new members, who defected from the All Progressives Congress, APC, into the party, Ladoja said the strength of the Accord Party was internal democracy.

He said this forestalls imposition of any candidate or group on the party.

A candidate of the party for the House of Representatives, Deji Aboderin, Senator Femi Lanlehin, who also joined the party from the APC; Bisi Ilaka, and other leaders of the party were present at the rally.

“The fact that APC leaders in Oyo town dumped the party to join AP is an indication that our people want change from the present misery. The Peoples Democratic Party lost in this state because there was in-fighting and lack of trust in the run-in to the 2011 election. This is happening in the APC now but we must thank God that our party is getting stronger.

“Those who voted this government in have realised their mistakes and they will not want to repeat that. The government has no link with the communities and the people. I am sure if the present governor (Abiola Ajimobi) was an APC member without holding such a political position, he would have joined the AP. He fears conducting council election because he is afraid that he will lose”, said the former governor.

While appreciating the Alaafin of Oyo, Oba Lamidi Adeyemi, for granting the use of the extended palace ground for the rally, Aboderin said the number of people who came for the rally on a short notice was overwhelming and a pointer to the fact that the present APC-led government in the state was no longer popular.

“I am sure this is not a rented crowd. Nobody was paid to come for this rally. It was only planned a few days ago but because of their love for the party, they came to witness the event. I have no doubt in me that the AP will form the next government in the state”, he said.