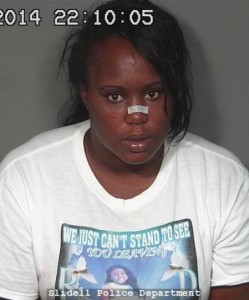 A New Orleans woman has been charged with fraud after she allegedly attempted to check in at Slidell Memorial Hospital while posing as her dead sister and wearing her memorial shirt.

Diondre Jones allegedly attempted to pass herself off as her deceased family member, Delores Jones, by using her sister’s social security number and birthday.

When hospital staff entered the dead sister’s name in the computer system, an error message reading “Date of Death Precedes Date of Service” popped up on the screen.

Jones had already been treated and released, but a Slidell Police officer was able to track her down in the parking lot.

When the officer asked the 26-year-old how hospital staffers had ended up with the wrong name, Jones reportedly pointed down at the memorial shirt she was wearing.

“They must have gotten the name from this shirt,” Jones said, WWL TV reported.

She was booked on one count of Medicaid fraud and another outstanding charge.