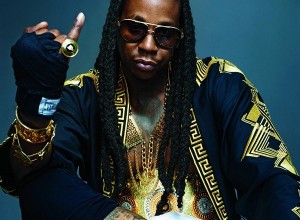 Well, that amount isn’t to hefty for our Nigerian celebrities, after all they are buying luxurious cars and other gadgets here and there.

I just got a report that American rapper 2 Chainz is set to perform in Kenya’s Capital, Nairobi on Saturday, November 1, 2014 in a show tagged Carnivore for the East African country, music acts hoping to collaborate with him have to put a leash on their hopes.

The American rapper has revealed it will cost a whopping $100k (N16M) to feature him on a song while in Africa.

See what he says according to BBC 1 Xtra: –

‘The Birthday sex’ rapper also justify the details for the very high charges, boastfully saying: ‘The thing is, when it comes to your video, I’m gonna change clothes twice. They’re never gonna see that outfit again, before mentioning Givenchy and Alexander McQueen as potential clothing items. “I’m gonna give you bars. I’m gonna wear fancy glasses and a bunch of chains you’ve never seen. I mean, I can help you You get me. You get charisma. You get girls that’s gonna come to your video shoot ’cause they know I’ma be there.’

The rapper also revealed there were no bargains to $100k charges ‘I’m not doin’ deals. I’m tellin’ what I give you, for that number. These are the services that I offer.’

2 Chainz, who first performed in Lagos & South Africa in 2013, is currently signed to Def Jam Records, an imprint of Universal Music Group.