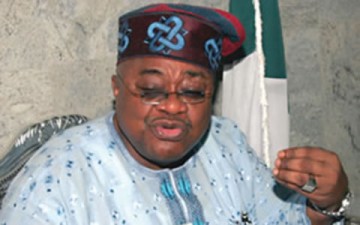 A former governor of Oyo State, Otunba Adebayo Alao-Akala, would on Thursday formally declare his intention to contest the governorship election in the state in 2015.

Alao-Akala told newsmen in Ibadan that he would make his intention known at a forum billed for the Watershed Events Centre in the state capital.

The News Agency of Nigeria (NAN) reports that Alao-Akala, an aspirant on the platform of the PDP, would be seeking the governorship position against the background of other aspirants from the ruling APC and the PDP.

The governorship aspirant, who is from Ogbomoso, said he would hold a procession with his supporters round the capital on Thursday morning before moving to the venue.

It would be recalled that Alao-Akala, who was elected as a deputy governor to former Gov. Rashidi Ladoja in 2003, later governed the state between 2007 and 2011. (NAN)