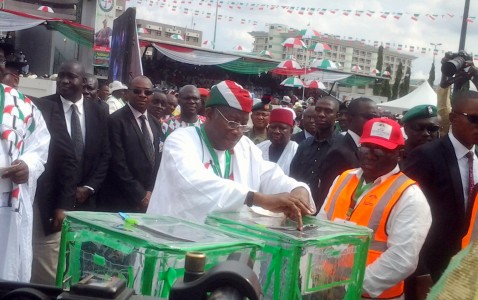 President Goodluck Jonathan on Sunday assured Nigerians of his administration’s commitment to free and fair elections in 2015.

Mr. Jonathan gave the assurance at the opening of the 2014 Catholic Bishops’ Conference in Warri, Delta State.

The president was represented by the state Governor, Emmanuel Uduaghan.

“On behalf of President Jonathan, I congratulate the Catholic Bishops’ Conference of Nigeria (CBCN).

“The president is committed to free and fair elections in 2015; he has given us the assurance”, Mr. Uduaghan said.

He noted that religion was vital to the transformation of any society, saying that his administration was partnering with religious bodies in that direction.

”This area had the worst experience in the Niger Delta crisis but prayers helped us to overcome the challenges.

”I believe that prayers will also help us to resolve the current Boko Haram insurgency in the North-East part of the country”, he said.

Speaking for himself, Mr. Uduaghan said that his administration would continue to create an enabling environment for investment.

“We embarked on ‘Delta Beyond Oil’ because we observed that oil cannot sustain the economy because of its volatility.

“The programme is all about the future of the youth; so, we will ensure there is security, infrastructure and human capacity to adequately attract investors”, he said.

The President of CBCN, Ignatius Kaigama, called for continuous prayers to sustain peace and unity in Nigeria.

He said that Nigeria’s security and other challenges were surmountable.

Mr. Kaigama, the Archbishop of Jos, said that those advocating for division of the country might not know the consequences.

“There is no guarantee that things will become better if we go our ways”, the cleric said.

He urged the Christian Association of Nigeria and the Jama’atu Nasril Islam to be committed to religious tolerance.

“Very objective and sincere meetings between these two umbrellas can bring about enduring religious peace in the country”, he said.

Mr. Kaigama urged the Federal Government to tackle insurgency with the same strength it confronted the Ebola Virus Disease.

Augustine Kasujja (Papa Nuncio, Pope Benedict the XVI’s representative in Nigeria) decried the insecurity in the North-East, noting that many lives had been lost to it.

The host, John Afareha of the Catholic Diocese of Warri, commended the bishops for their contributions to the growth of the church and the society.

He noted that the event coincided with the golden jubilee of the diocese.

The programme will end on September 19.