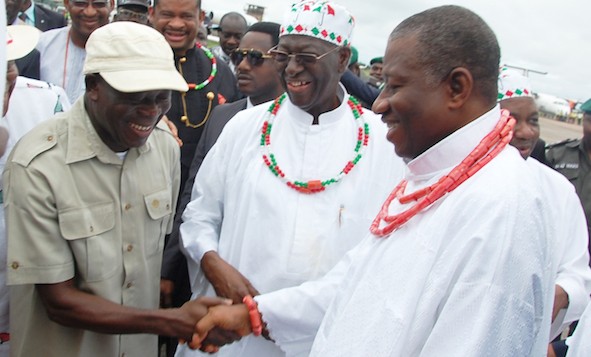 Governor Adams Oshiomhole of Edo State has said that it was a pipe dream for President Goodluck Jonathan to think that the defection of Chief Tom Ikimi from the All Progressives Congress to the Peoples Democratic Party would translate to electoral victory for PDP in the state.

Oshiomhole, who was reacting to a boast by President Jonathan at the weekend during a unity rally in Benin City that the PDP would recapture Edo and Rivers States in 2015 and 2016, said it was unfortunate that the president was being deceived by PDP leaders in the state.

The governor, who spoke through his Political Adviser, Hon Charles Idahosa, said Mr. Jonathan should have inquired how many persons defected alongside Ikimi to the PDP.

He noted that the Binis, who constitute over 50 per cent of Edo population, have been marginalized by the PDP-led federal government, adding it amounts to wishful thinking for President Jonathan to think that Esan godfathers would win Edo for him.

His words: “Ikimi said he left APC because after cooking the food, people came and stole both the pot and the food away. But in this case, he forgot that it was Ize-Iyamu who cooked the food that those that left the APC for PDP took along.  Ikimi went to the stadium to hijack the show by introducing Ize-Iyamu instead of Ize-Iyamu introducing him to the president.

“Ize-Iyamu, who did all the cooking, was now a spectator. Dr.  Samuel Ogbemudia was never mentioned there, former Governor Lucky Igbinedion was seated there, his father Esama was seated and none of them were asked to speak, yet President Jonathan is boasting that PDP will win Edo. That is laughable.

“We will deal with them in February. As we speak today there is no single Bini man or woman who is a minister, Permanent Secretary, CEO, so what is the PDP going to tell Bini people that will make the Binis vote for PDP? And the days of rigging are over. We are going to deal with them. Every appointment is in Esan and Uromi in particular. It is a wild dream to say they will win Edo”.