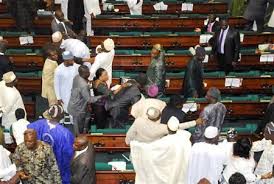 The House of Representatives on Wednesday directed its Committee on Ethics and Privileges to probe $50,000 bribe allegedly offered the Peoples Democratic Party (PDP) lawmakers in the house.

The member said that it was to kill a motion to probe the 9.3 million dollars seized by the South African authorities from three Nigerians and an Isreali.

Responding to Madaki’s allegation, the Deputy Speaker, Emeka Ihedioha, said that Madaki would appear before the Ethic and Privileges Committee to prove his allegation.

Ihedioha, who described Madaki’s allegation as “grievous and regrettable”, said he (Madaki) risked suspension if he failed to prove the allegation.

“This matter is referred to the House Committee on Ethics and Privileges for investigation and to report back in two weeks”, Ihedioha stated.

The News Agency of Nigeria (NAN) recalls that a motion to probe the incident on Tuesday was voted out without debate.

This development caused APC lawmakers to walk out during the plenary. (NAN)