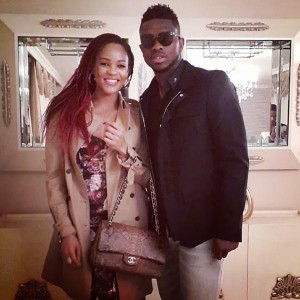 The former beauty queen Adaeze Yobo, might be married to Joseph Yobo but he reveals that he isn’t her first love.

The ex-beauty queen and has revealed that her first real love is not her husband as many thought but her son, Joey whom she gave birth in 2010.

She opened up in an interview with Sun Newspapers when asked how she feels like being a mother. She replied, ‘It’s been a wonderful experience being mother to this wonderful son of mine. When the little boy came out from my body, I dis­covered that he’s my first real love. I thought I was in love with my husband until I saw my son. I have never loved somebody that much in my life,‘ she said.

She also narrated how she met and got married to the former captain of Nigeria’s senior national football team.

According to her, they met through a friend at an event after which they became lovers and made the transition into ending up as a couple. ‘I met him in Nigeria through a friend at an event. From there, we became close friends. I became pregnant and we got married im­mediately. Everything happened in a very short time. A lot of people thought it wasn’t going to work but at that moment, I knew I felt something I had never felt with anyone in my life and I said to myself, why not take that chance?’

Adaeze is presently studying New Media at a University in Turkey where she and her young family currently reside.