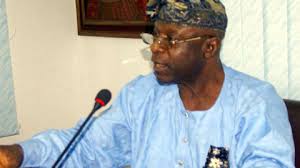 Former President Olusegun Obasanjo has mourned the death of General Benjamin Adekunle (rtd), saying his exit would has created a vacuum very difficult to fill.

Obasanjo, who described Adekunle as a “friend, colleague and course mate”, said his contribution during the nation’s three years civil war was no mean effort, which would also be remembered for long a time.

In a statement on Saturday by the former president, who received the instrument of surrender of Biafran soldiers to the Federal troops, signaling the end of the war, said Adekunle, also known as ‘Black Scorpion’, achieved much while they were both undergoing a military course in Ghana.

The statement reads in parts: “I received with shock the news of the death of my colleague, friend and course mate, Gen. Benjamin Adekunle today. I can recall with profound memories what he was able to achieve as a course mate at Teshi, Accra Ghana.

“The late retired General, made a no mean contribution for the Nigerian civil war. His efforts would be forever remembered and May his soul rest in peace. I am very shocked about by this news today.

“His vacuum will be difficult to fill in the family, but, I pray for them to have the fortitude to bear this loss”.