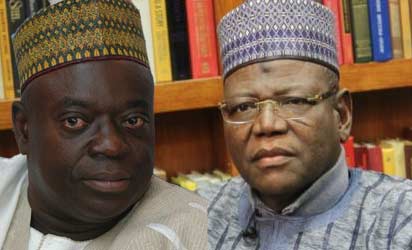 What was planned to be an event without political statement turned out opposite yesterday during the colorful take-off of this year’s Hajj in Jigawa State as Governor Babangida Aliyu of Niger State told the state governor, Alhaji Sule Lamido, to be prepared for higher service following what he described as his remarkable feat in the state.

Gov. Lamido is rumored to be eyeing the Peoples Democratic Party (PDP) presidential ticket for the 2015 election.

Speaking during the 2014 Hajj Operation at the N13 billion new Dutse International Airport at Fanisau village, Dutse, Governor Aliyu, who is also the chairman of the Northern States Governors’ Forum, said, “I’ve heard about what you have been doing and I have come to see it for myself. All I can say is that you should be prepared for higher service”.

The audience applauded as Aliyu spoke glowingly of his host. Among the dignitaries were Vice President Namadi Sambo, who represented President Goodluck Jonathan, the Sultan of Sokoto, Alh Abubakar Sa’ad III, who is also the Amirul Hajj, Oba Rilwanu Akiolu of Lagos, the Emir of Kano, Alh Sanusi Lamido Sanusi, the Shehu of Borno and many other emirs.

Equally impressed by the Jigawa governor’s achievements that the Sultan declared that if there was a fourth term, Lamido should have been asked to run for office again.

The Sultan described the newly commissioned airport as “the best in this part of the world if not the best”.

Sambo, Sultan, Lamido, others urged the pilgrims to pray for divine intervention in the nation’s insecurity problem and a hitch-free 2015 election.

Sambo, who conveyed the president’s regrets for his inability to be at the event, asked the 530 pilgrims to be good ambassadors, imbibe the orientation given to them by the country’s agencies, to adhere to Saudi Arabia laws.

He also enjoined them to pray fervently for God’s intervention in the nation’s security challenges as well as for smooth conduct of 2015 general elections.

The vice president also asked them to engage in spiritual revival.

He hailed the authorities of Saudi Arabia Kingdom for clearing Nigeria’ s pilgrims for the holy pilgrimage despite Ebola scare, pledging that no infected person would be allowed to fly to the holy land.

He added that the government is committed to the welfare of the pilgrims, better and hitch- free hajj operation.

Sambo disclosed that for the first time, 50 per cent of the pilgrims will be flown directly to Medina, adding that better accommodations have been provided for them.

He also disclosed that the government has approved N1.7billion for states to fight the Ebola virus.

He noted that government has effectively fought to curtail the disease, adding that it would not stop fighting it.

The pilgrims were airlifted to Saudi Arabia by Max Air.