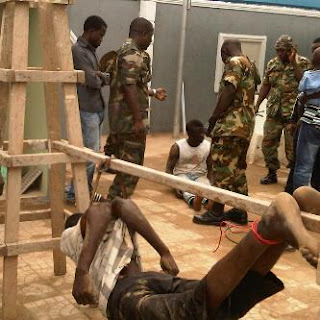 The Federal Government on Tuesday dismissed as baseless, a recent report by Amnesty International, accusing the police and the military of routinely torturing women, men and children using a wide range of inhuman methods.

The Chairman, National Committee Against Torture, Dr. Samson Ameh (SAN), who dismissed the allegation at a press conference in Abuja, said the AI’s report was mischievous.

Ameh added that the committee would not be distracted by the organisation’s “campaign of calumny” from doing what was right and in meeting with the obligations under international law.

He said the allegations in Amnesty International’s report could not be true as the police were being taught on how to use modern technological equipment in detection of crime, and that there were anti-torture desks across various police stations in the country.

He said, “Right from training, the Nigerian Police are being taught on how to use modern technological equipment in detection of crime so that they do not need to resort to old crude method of extortion.

“The significant aspect of the police syllabus is that it contains a section on Human Rights so that right from the training the Police are taught on the need to observe the human rights of citizens.

“In the course of our visit to Police stations, we were very pleased to see that in each station there is an anti-torture unit where anybody, either police or non-police citizens can report any act of torture, or other cruel, degrading treatment or punishment meted to them”.

While he said the Nigeria Police should be commended for setting up the anti-torture desk, Ameh accused AI of mischievously renaming the police Anti-Torture Desk as ‘Torture Desk’.

He said, “Indeed the Nigerian Police should be commended for establishing the Anti-Torture desk rather than being condemned as has been done by Amnesty International in their report titled ‘Welcome to hell fire: Torture and other ill treatment in Nigeria’.

“To show how mischievous their report is, they renamed the Anti-Torture Desk in Police station as quote and unquote ‘Torture Desk’ in order to paint Nigeria black in the eyes of the world”.

In its report titled, ‘Welcome to hell fire: Torture and other ill treatment in Nigeria’, which was released on September 18, Amnesty International had stated in part, “Across the country, the scope and severity of torture inflicted on Nigeria’s women, men and children by the authorities supposed to protect them is shocking even to the most hardened human rights observer.

“Torture is not even a criminal offence in Nigeria. The country’s parliament must immediately take this long overdue step and pass a law criminalising torture. There is no excuse for further delay”.